Question 1.
Which average would be suitable in the following cases?
(i) Average size of readymade garments.
(ii) Average intelligence of students in a class.
(iii) Average production in a factory per shift.
(iv) Average wages in an industrial concern.
(v) When the sum of absolute deviations from average is least.
(vi) When quantities of the variable are in ratios.
(vii) In case of open-ended frequency distribution.
Answer:
(i) Mode Average size of any ready made garments should be the size for which demand is the maximum. Hence, the modal value which represents the value with the highest frequency should be taken as the average size to be produced.
(ii) Median It is the value that divides the series into two equal parts. Therefore, Median will be the best measure for calculating the average intelligence of students in a class as it will give the average intelligence such that there are equal number of students above and below this average. It will not be affected by extreme values.
(iii) Arithmetic Mean The average production in a factory per shift is best calculated by Arithmetic Mean as it will capture all types of fluctuations in production during the shifts.
(iv) Arithmetic Mean Arithmetic Mean will be the most suitable measure. It is calculated by dividing the sum of wages of all the workers by the total number of workers in the industrial concern. It gives a fair idea of average wage bill taking into account all the workers.
(v) Arithmetic Mean The algebraic sum of the deviations of values about Arithmetic Mean is zero. Hence, when the sum of absolute deviations from average is the least, then mean could be used to calculate the average.
(vi) Median Median will be the most suitable measure in case the variables are in ratios as it is least affected by the extreme values.
(vii) Median Median is the most suitable measure as it can be easily computed even in case of open ended frequency distribution and will not get affected by extreme values.

(ii) Which average is affected most by the presence of extreme items?
(a) Median
(b) Mode
(c) Arithmetic Mean
(d) Geometric Mean
(e) Harmonic Mean
Answer:
(c) It is defined as the sum of the values of all observations divided by the number of observations and therefore it is. affected the most by extreme values.

Question 3.
Comment whether the following statements are true or false.
(i) The sum of deviation of items from median is zero.
(ii) An average alone is not enough to compare series.
(iii) Arithmetic mean is a positional value.
(iv) Upper quartile is the lowest value of top 25% of items.
(v) Median is unduly affected by extreme observations.
Answer:
(i) False
This mathematical property applies to the arithmetic mean and not to median.
(ii) True
Average is not enough to compare the series as it does not explain the extent of deviation of different items from the central tendency and the difference in the frequency of values. These are measured by measures of dispersion and kurtosis.
(iii) False
Median is a positional value.
(iv) True
The upper quartile also called the third quartile, has 75 % of the items below it and 25 % of items above it.
(v) False
Arithmetic mean is unduly affected by extreme observations.

Question 4.
If the arithmetic mean of the data given below is 28, find (a) the missing frequency and (b) the median of the series So, the Median class = Size of ()th item = 50th term.
50th item lies in the 57th cumulative frequency and the corresponding class interval is 20-30.

Question 5.
The following table gives the daily income of ten workers in a factory. Find the arithmetic mean. 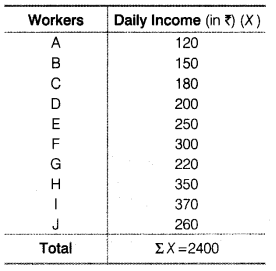 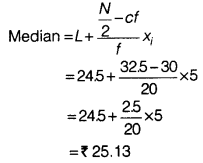 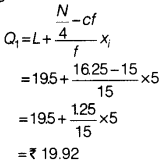 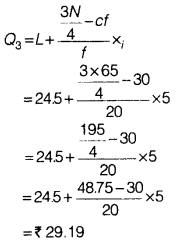