Question 2.
(i)Write the structures of different isomeric amines corresponding to the molecular formula, C4H11N.
(ii) Write 1UPAC names of all the isomers.
(iii) What type of isomerism is exhibited by different pairs of amines?
Answer: Answer:
(i) Benzene into aniline: Question 7.
Write the chemical reaction of aniline with benzoyl chloride and write the name of the product obtained.
Answer:
Aniline will undergo benzoylation to form a benzoyl derivative. The reaction will take place in the presence of aqueous alkali.

Only the primary amines will evolve N2 gas on reacting with nitrous acid (HONO) and form corresponding primary alcohols.

Question 1.
Write IUPAC names of the following compounds and classify them into primary, secondary and tertiary amines. 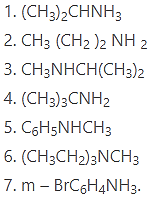 Question 3.
Account for the following :
(i) pKb of aniline is more than that of methylamine. (C.B.S.E. Delhi 2008, 2011)
(ii) Ethylamine is soluble in water whereas aniline is not. (C.B.S.E. Delhi 2008, 2011)
(iii) Methylamine in water reacts with ferric chloride to precipitate hydrated ferric oxide. (C.B.S.E. Delhi 2008)
(iv) Although the amino group is o- and p-directing in aromatic electrophilic substitution reactions, aniline on nitration gives a substantial amount of m-nitroaniline. (C.B.S.E. Sample Paper 2010)
(v) Aniline does not undergo Friedel Crafts reaction. (C.B.S.E. Delhi 2008, Sample Paper 2010, C.B.S.E. Outside Delhi 2015)
(vi) Diazonium salts of aromatic amines are more stable than those of aliphatic amines.
(vii) Gabriel phthalimide synthesis is preferred for synthesising primary amines.
Answer:
(i) pKb of aniline is more than that of methylamine because aniline is less basic. In aniline, the electron pair on the nitrogen atom is involved in conjugation with the ring and is less available for protonation than in methylamine. Therefore, aniline has more pKb.

(ii) Ethylamine is water-soluble due to hydrogen bonding. However, in aniline, the phenyl (C6H5) group is bulky in size and has -I effect. As a result, its hydrogen bonding with water is negligible and is therefore not soluble or miscible with water.

(iii) Methylamine forms a soluble hydroxide on reacting with water. The OH– ions released by the hydroxide combine with  Fe3+ ions of ferric chloride to give ferric hydroxide or hydrated ferric oxide which is brown in colour.

(iv) Amino group (-NH2) is an electron releasing or activating group when present on the benzene ring. It activates the ortho and para positions in the ring towards electrophilic substitution due to its +M or +R effect. The nitration of aniline carried by nitrating mixture (cone. HN03 + cone. H2SO4) is electrophilic in nature. The expected product of nitration is a mixture of ortho and para nitroaniline. However, in this case, a substantial amount of metanitroaniline is also formed. In fact, aniline being a base gets protonated in the acidic medium to form anilinium cation which is no longer activating. Rather, it is deactivating in nature and deactivates the ring. The substitution takes place at the meta position.

Thus, the nitration of aniline as such gives a significant amount of m-nitroaniline (47%). In addition to this, p-nitroaniline
is the major constituent (51%) while ortho isomer is in negligible amount (2%) mainly due to the reason that the ortho position
is sterically hindered because of the —NH2 group.

In order to check the activation of the ring by an amino group, the nitration of aniline is carried out indirectly by first
acetylating with acetic anhydride (or acetyl chloride) to form acetanilide. The compound formed is nitrated by the nitrating
mixture and the isomeric nitro derivatives are then hydrolysed in the acidic medium as discussed under halogenation.

(v) Aniline does not undergo Friedel Crafts reaction. Actually, aniline being a Lewis base forms a complex with AICI3 which is a Lewis acid. The amino group is not in a position to activate the benzene ring towards electrophilic substitution i.e., alkylation or acylation which leads to Friedel Crafts reaction. Therefore, the reaction is not possible. The same problem arises in phenols as well. Answer:
From Kb  and PKb values of some Amines: Question 6.
Describe a method for the identification of primary, secondary, and tertiary amines. Also, write chemical equations of the reactions involved.
Answer:
The three type of amines can be distinguished by Hinsberg test. In this test, the amine is shaken with benzene sulphonyl chloride (C6H5SO2Cl) in the presence of excess of aqueous NaOH or KOH. A primary amine reacts to give a clear solution, which on acidification yields an insoluble compound.

In case, the temperature is allowed to rise above 278 K, benzene diazonium chloride is decomposed by water to form phenol.

(iii) Hoffmann’s bromamide reaction:
By Hoffmann degradation of Acid Amides. (Hoffmann Bromamide Reaction). When a primary acid amide is heated with an aqueous or ethanolic solution of sodium hydroxide and bromine, it gives a primary amine with one carbon
atom less.

The reaction is, therefore, regarded as a degradation reaction. For example.

(iv) Coupling reaction:
The reaction of diazonium salts with phenols and aromatic amines to form azo compounds having an extended conjugated system with both aromatic rings joined through the — N = N — bond, is called coupling reaction. In this reaction; the nitrogen atoms of the diazo group are retained in the product. The coupling with phenols takes place in a mildly alkaline medium while that with amines occurs under faintly acidic conditions. For example; Coupling generally occurs at the p-position with respect to the hydroxyl or the amino group, if free, otherwise it takes place at the o-position.

(v) Ammonolysis:
The mechanism involves the nucleophilic attack of NH3 molecule (through lone pair) on alkyl halide by an SN2 mechanism. Amine salt is formed which reacts with ammonia to give primary amine and ammonium halide as follows:

The primary amine formed now acts as the nucleophile and reacts with another molecule of the alkyl halide to form secondary amine.

The reaction is repeated to form tertiary amine and quaternary ammonium salt as follows :

(vi) Acetylation:
Acylation of Amines Both aliphatic and aromatic amines form acyl derivatives (substituted acid amides) with reagents such as acid chlorides, esters, or acid anhydrides. The acylation is carried out in the presence of a base stronger than pyridine (e.g., NaOH) which can remove the acid formed in the reaction by neutralising it.
(a) Acylation of Aliphatic Amines: Both primary and secondary aliphatic amines from acyl derivatives as follows:

(b) Acylation of Aromatic Amines: Aromatic amines such as aniline can be acylated in the same manner with both acid
chloride and acid anhydride.

(vii) Gabriel’s phthalimide synthesis:
In this reaction phthalimide is converted into its potassium salt by treating it with alcoholic potassium hydroxide. Then potassium phthalimide is heated with an alkyl halide to yield an N-alkylpthalimide which is hydrolysed to phthalic acid and primary amine by alkaline hydrolysis Question 9.
Give the structures of A, B, and C in the following reactions: Question 12.
Why cannot aromatic amines be prepared by Gabriel’s phthalimide reaction? (C.B.S.E. Sample Question Paper 2012, H.P. Board2017)
Answer:
In Gabriel phthalimide reaction, the potassium salt of phthalimide is formed. It readily reacts with an alkyl halide to form the corresponding alkyl derivative.

But it is not in a position to react with the aryl halide in case primary aromatic amine is to be prepared. Actually, the cleavage of C – X bond in haloarene or aryl halide is quite difficult due to partial double bond character. Therefore, aromatic amines cannot be prepared by this method.

(a) Primary aliphatic amines react with nitrous acid at low temperature (cold conditions) to form primary alcohol and nitrogen gas accompanied by brisk effervescence. Nitrous acid is unstable in nature and is prepared in situ by reacting sodium nitrite with dilute hydrochloric acid. For example,

The reaction ¡s used as a rest for primary aliphatic amines as no other amine evolves nitrogen with nitrous acid.

(b) Primary aromatic amines such as aniline react with nitrous acid under ice cold conditions (273—278 K) to form benzene diazonium salt. The reaction is known as diazotisation reaction.

In case, the temperature is allowed to rise above 278 K, benzene diazonium chloride is decomposed by water to form phenol.

Question 14.
Give plausible explanation for each of the following :
(i) Why are amines less acidic than alcohols of comparable molecular masses ?
(ii) Why are primary amines higher boiling than tertiary amines ?
(iii) Why are aliphatic amines stronger bases than aromatic amines ? (H.P. Board 2008)
Answer:
(i) The acidic character in the both in cases is due to the release of H+ ion. Now, the anion in case of amine

(iii) In the aromatic amines, (lie secondary and tertiary amines are more basic than aniline.
Actually, the basic strength or the electron releasing tendency of an amine depends upon the following factors.