Question 1.
How would you determine the standard electrode potential of the system ; Mg2+ /Mg ?
Answer: Question 4.
Calculate the potential of hydrogen electrode in contact with a solution with pH equal to 10.
Answer: Question 5.
Calculate e.m.f. of the cell in which the following reaction takes place Question 8.
Suggest a way to determine the A∘m for water.
Answer:
Water (H2O) is a weak electrolyte. Its molar conductance at infinite dilution i.e., A∘m can be determined in terms of A∘m for strong electrolytes. This is in accordance with Kohlrausch’s Law. Question 11.
Suggest a list of metals that are extracted electrolytically.
Answer:
Na, Ca, Mg and Al

Question 13.
Write the chemistry of recharging the lead storage battery highlighting all the materials that are involved during recharging.
Answer: Question 14.
Suggest two materials other than hydrogen that can be used as fuels in fuel cells.
Answer:
Methane and Methanol.

Question 15.
Explain how rusting of iron can be envisaged as the setting up of an electrochemical cell.
Answer:
Iron (Fe) is involved in the redox-reaction that is carried in the electrochemical cell which is set up. As a result, it slowly dissolves and the metal surface gets rusted or corroded.
The redox-reaction may be described as follows :
At anode: Fe (s) undergoes oxidation to release electrons
F2(s) → Fe2+(aq) + 2e–              ….(oxidation)
At cathode: The electrons which are released participate in the reduction reaction and combine with H+ ions released from carbonic acid (H2CO3) formed by the combination of CO2 and H2O present.

Question 1.
Arrange the following metals in the order in which they displace each other from the solution of their salts: Al, Cu, Fe, Mg and Zn.
Answer:
Mg, Al, Zn, Fe, Cu, Ag.

Question 3.
Depict the galvanic cell in which the reaction
Zn(s) + 2Ag+(aq) → Zn2+(aq) + 2Ag(s) takes place. Further show :
(i) which electrode is negatively charged ?
(ii) the carriers of the current in the cell.
(iii) individual reaction at each electrode. (C.B.S.E. Delhi 2008)
Answer:
The galvanic cell in which the given reaction takes place is depicted as:
Zn(s) | Zn2+ (aq) || Ag+ (aq) | Ag(s)
(i) Zn electrode (anode) is negatively charged
(ii) Tons are carriers of current in the cell and in the external circuit, current from silver to Zinc.
(iii) The reaction taking place at the anode is given by,
Zn(s) -H → Zn2+(aq) + 2e–
The reaction taking place at the cathode is given
Ag++ e– → Ag(s)

Question 4.
Calculate the standard cell potentials of galvanic cell in which the following reactions take place Molar conductivity of a solution at a given concentration is the conductance of volume V of a solution containing 1 mole of the electrolyte kept between two electrodes with the area of cross-section A and distance of unit length.

Molar conductivity increases with a decrease in concentration. This is because the total volume of the solution containing one mole of the electrolyte increases on dilution.

Question 10.
The conductivity of sodium chloride solution at 298 K has been determined at different concentrations and results are given below :

Calculate molar conductivity for all the concentrations and draw a plot between Acm and c√. Find the value A∘m from the graph.
Answer:
1Scm−1100Sm−1=1 (unit conversion factor) A∘m can be obtained on extrapolation to zero concentration along Y-axis. It is 124·0Scm2mol-1. Question 15.
A solution of Ni(NO3)2 is electrolyzed between platinum electrodes using a current of 5·0 ampere for 20 minutes. What weight of Ni will be produced at the cathode? (Atomic mass of Ni = 58·7). (Jharkhand Board 2009)
Answer:

Question 16.
Three electrolytic cells A, B, and C containing electrolytes zinc sulphate, silver nitrate, and copper sulphate respectively, were connected in series. A steady current of 1·50 ampere was passed through them until 1·45 g of silver was deposited at the cathode of cell B. How long did the current flow? What weight of copper and of zinc were deposited? (Atomic mass of Cu = 63·5 ; Zn = 65·3; Ag = 108) (C.B.S.E. Outside Delhi 2008, Jharkhand Board 2010)
Answer: Question 17.
Predict if the reaction between the following is feasible: 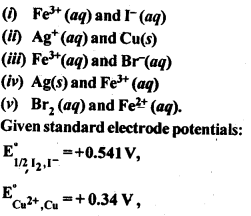 At cathode: Ag+ ions with less discharge potential are reduced in preference to H+ ions which will remain in solution. As a result, silver will be deposited at cathode.
Ag+ (aq) + e– → Ag (deposited)
At anode: An equivalent amount of silver will be oxidised to Ag+ ions by releasing electrons.

(ii) An aqueous solution of AgNO3 using platinum electrodes:
In this case, the platinum electrodes are the non-attackable electrodes. On passing current the following changes will occur at the electrodes.
At cathode: Ag+ ions will be reduced to Ag which will get deposited at the cathode.
At anode: Both NO–3 and OH– ions will migrate. But OH– ions with less discharge potential will be oxidised in preference to NO–3 ions which will remain in solution.

Thus, as a result of electrolysis, silver is deposited on the cathode while O2 is evolved at the anode. The solution will be acidic due to the presence of HNO3.
(iii) A dilute solution of H2SO4 using platinum electrodes:
On passing current, both acid and water will ionise as follows:

At cathode: H+ (aq) ions will migrate to the cathode and will be reduced to H2.

Thus, H2 (g) will be evolved at the cathode.
At anode: OH– ions will be released in preference to SO2−4 ions because their discharge potential is less. They will be oxidized as follows:

Thus, O2 (g) will be evolved at the anode. The solution will be acidic and will contain H2SO4.
(iv) An aqueous solution of CuCl2 using platinum electrodes :
The electrolysis proceeds in the same manner as discussed in the case of AgNO3 solution. Both CuCl2 and H2O will ionise as follows :

At cathode: Cu2+ ions will be reduced in preference to H+ ions and copper will be deposited at the cathode

At anode: C– ions will be discharged in preference to OH– ions which will remain in solution.

Thus, Cl2 will be evolved at the anode.