Chapter 6 General Principles and Processes of Isolation of Elements

Question 1.
Name some ores which can be concentrated by magnetic separation method.
Answer:

Question 2.
What is the significance of leaching in the extraction of aluminium?
Answer:
Aluminium contains silica (SiO2), iron oxide (Fe2O3) and titanium oxide (TiO4) as impurities. These impurities can be removed by the process of leaching. During leaching, the powdered bauxite ore is heated with a concentrated (45%) solution of NaOH at 473-523 K, where alumina dissolves as sodium meta-aluminate and silica as sodium silicate leaving Fe2O3, TiO2 and other impurities behind: 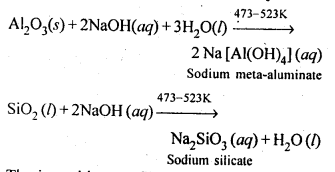 The impurities are filtered off and solution of sodium meta-aluminate is neutralised by passing CO2 when hydrated alumina separates out while sodium silicate remains in solution. The hydrated aluminathus obtained is filtered, dried and heated to give back pure alumina.

Thus, by leaching, pure alumina can be obtained from bauxite ore. In actual process, the sulphide ore is finely powdered and is mixed with water to form a slurry in a tank as shown in Fig. 6.3. To this oily component of the sulphide ore particles by water. As a result, ore and oil constitute hydrophobic or water-repelling components while gangue and water form a lyophilic or water-attracting component.

Question 3.
Why is the extraction of copper from its sulphide ore difficult than that from its oxide through reduction?
Answer:
Sulphide ore of copper (Cu2S) cannot be directly reduced by either coke or hydrogen because ∆fG° of Cu2S is more than those of CS2 and H2S that will be formed as a result of the reaction.
These reactions are, therefore, not feasible. However, the ∆fG° of Cu2O is lower than that of CO2. Therefore, the sulphide ore is first roasted to Cu2O which is then reduced.

Question 4.
Explain
(i) zone refining
(ii) column chromatography. (C.B.S.E. Sample Paper 2015)
Answer:
(i) Zone refining (Fractional Crystallisation). This method is used only if a metal in almost pure state is required. Metals like germanium and gallium which are used in semiconductors are purified by this method. The principle of zone refining is based on the fact that impurities are more soluble in molten metal than in solid metal. (ii) Chromatographic method. This method can also be employed on small scale for the purification of certain metals. Adsorption chromatography is normally used for this purpose. Different components present in a given sample are adsorbed to a different extent on the surface of the adsorbent. Question 5.
Out of C and CO, which is a better reducing agent at 673 K?
Answer:
When carbon reacts with dioxygen, two reactions are possible
C(s) + O2(g) → CO2(g) ……(i)
2C(s) + O2(g) → 2CO(g) …..(ii)
When CO is used as a reducing agent, it gets oxidized to CO2
2CO + O2 → 2CO2 …(iii)
It is clear from the Ellingham diagram that at 673K the ∆G° for the oxidation of CO to CO2 is more negative than the reaction (i) and reaction (ii). Therefore, CO is a better reducing agent than C. It is supported by the fact that the curve for the reaction (iii) lies below the curve for the reaction (i) and reaction (ii) at 673K. An element below in the Ellingham diagram reduces the oxide of other metal which lies above it.

Question 7.
Write the chemical reactions which take place in different zones in the blast furnace during the extraction of iron.
Answer: The chemical reactions which take place in the blast furnace are briefly discussed.
Zone of combustion. At the bottom of the furnace, the blast of hot air causes the combustion of coke into carbon dioxide. The reaction is highly exothermic and a temperature of nearly 2170 K develops. It supplies most of the heat required for the process.

Zone of heat absorption. As CO2 gas rises up, it combines with more coke to form carbon monoxide. Since the reaction is endothermic, the temperature in the middle of the furnace is nearly 1570 K. It further decreases as the reaction proceeds.

Zone of slag formation. In the middle of the furnace, the temperature is nearly 1123 K. Here limestone (CaCO3) decomposes to form CaO and CO2. The former (CaO) combines with silica (SiO2) which is an impurity in the haematite ore to form calcium silicate (CaSiO3) that is fusible. This implies that CaO has acted as a basic flux. It has combined with the acidic impurity of Si02 to form slag.

Zone of reduction: This is the upper part of the furnace. The temperature ranges between 500K to 900K. Here haematite (Fe2O3) is reduced to FeO.

Question 8.
Write the chemical reactions which take place in the extraction of zinc from zinc blende.
Answer:
Zinc blende is chemically zinc sulphide (ZnS). It undergoes the following reactions:

Zinc metal is in crude or impure form. It can be refined with the help of electro-refining. In this method, impure zinc is made anode while a plate of pure metal acts as the cathode. The electrolyte is aqueous zinc sulphate containing a small amount of dilute H2SO4. On passing electric current, Zn2+ ions from the electrolyte migrate towards the cathode and are reduced to zinc metal which gets deposited on the cathode.

From anode, an equivalent amount of zinc gets oxidised to Zn2+ ions which migrate to the electrolyte

Question 9.
State the role of silica in the metallurgy of copper.
Answer:
During roasting, copper pyrites are converted into a mixture of FeO and Cu20. Thus, acidic flux silica is added during smelting to remove FeO (basic). FeO combines with SiO2to form famous silicate (FeSiO3) slag which floats over molten matte. From the above discussion, we may conclude that the basic requirements for the refining of metal by Vand Alkel process and Mond’s process are:

Question 13.
How can you separate alumina from silica in bauxite ore associated with silica? Give equations if any.
Answer:
The purification of bauxite containing silica as the main impurity is done by Serpeck’s process. The powdered ore is mixed with coke and heated to about 2073 K in an atmosphere of nitrogen. Silica (SiO2) is reduced to silicon which being volatile escapes. Alumina (Al2O3) is converted into aluminium nitride (AIN) by reacting with nitrogen. It is hydrolysed upon heating with water to get the precipitate of Al(OH)3. From the precipitate, Al2O3 is recovered upon strong heating. 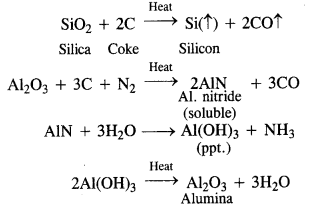 Question 15.
How is ‘cast iron’ different from ‘pig iron’?
Answer:
Iron obtained from the blast furnace is called pig iron. It contains about 4% carbon and other impurities of S, P, Si, Mn etc. When pig iron is mixed with scrap iron and coke and then heated in a blast of hot air, some impurities are removed. Cast iron is obtained. It contains 3% carbon and some other impurities. It is hard and brittle.

Question 16.
Differentiate between mineral and ore.
Answer:
The naturally occurring chemical substances in form of which the metal occurs in the earth along with impurities are called minerals. The minerals from which the metal can be extracted conveniently and economically are called ore. Thus, all ores are minerals but all minerals are not ores. For example, iron is found in the earth’s crust oxides, carbonates and sulphides. Out of these minerals of iron, the oxides of iron are employed for the extraction of the metal. Therefore, oxides of iron are the ores of iron. Similarly, aluminium occurs in the earth’s crust in form of two minerals, i.e, bauxite (Al2O3. x H2O) and clay (Al2O3.2SiO. 2H2O). Out of these two minerals, Al can be conveniently and economically extracted from bauxite the ore of alluminium.

Question 20.
Why is zinc not extracted from zinc oxide through reduction using CO?
Answer:
The standard free energy of formation (Δf G°) of CO2 from CO (fig 6.8) is higher than that of the formation-of ZnO from Zn. Therefore, CO cannot be used to reduce ZnO to Zn.

Since ∆G° comes out to be negative, the reaction is feasible.

Question 23.
The choice of a reducing agent in a particular case depends on the thermodynamic factors. How do you agree with this statement? Support your opinion with two examples.
Answer:
Thermodynamic factors have a major role in selecting the reducing agent for a particular reaction.
(i) Only that reagent will be preferred which will lead to decrease in free energy (∆G°) at a certain specific temperature.
(ii) A metal oxide placed lower in the Ellingham diagram cannot be reduced by the metal involved in the formation of the oxide placed higher in the diagram.
Examples:
(0 Al2O3 cannot be reduced by Cr present in Cr2O3 since the curve for Al2O3 is placed below that of Cr2O3 in the Ellingham diagram
(ii) CO cannot reduce ZnO because there is hardly any change in free energy (∆G°) as a result of the reaction.

Sodium obtained by this method is almost pure while chlorine is the by-product.
Chlorine can also be obtained by carrying out the electrolysis of an aqueous solution of sodium chloride. The process is carried in Nelson’s cell. The various reactions which take place are as follows :

At cathode. Both Na+ and H+ ions migrate towards the cathode but H+ ions are discharged in preference to Na+ ions since their discharge potential is less. Na+ ions remain in the solution.

At anode: Both Cl– and OH– ions migrate towards the anode but Cl– ions are discharged in preference to OH” since their discharge potential is less. OH– ions remain in the solution.

Thus, in the electrolysis of an aqueous NaCl solution, H2 gas is evolved at the cathode and chlorine at the anode. The solution contains NaOH and is, therefore, basic in nature.
It is always better to prepare chlorine by Down’s process.

Question 25.
What is the role of a graphite rod in the electrometallurgy of aluminium?
Answer:
In the electrometallurgy of aluminium, oxygen gas is evolved at the anode. It reacts with graphite or carbon (graphite electrodes) to form carbon monoxide and carbon dioxide. In case some other metal electrodes act as an anode, then oxygen will react with aluminium formed during the process to form aluminium oxide (Al2O3) which will pass into the reaction mixture. Since graphite is cheaper than aluminium, its wastage or consumption can be tolerated.

Question 26.
Outline the principles of refining of metals by the following methods:
(i) Zone refining
(ii) Electrolytic refining
(iii) Vapour phase refining
Answer:
(i) 1. This method is based on the principle that the impurities are more soluble in the molten state of metal (the melt) than in the solid-state. In the process of zone refining, a circular mobile heater is fixed at one end of a rod of impure metal. As the heater moves the molten zone of the rod also moves with it. As a result, pure metal crystallizes out of the melt and the impurities pass onto the adjacent molten zone. This process is repeated several times, which leads to the segregation of impurities at one end of the rod. Then the end with impurities is cut off. Silicon, boron, gallium, indium, etc can be purified by this process.

(iii) Vapour phase refining is the process of refining metal by converting it into its volatile compound and then, decomposing is to obtain a pure metal to carry out this process.
(a) The metal should form a volatile compound with available reagent, and
(b) The volatile compound should be easily decomposable so that the metal can be easily recovered.
Nickel, Zirconium, and titanium are refined using this method.

Question 27.
Predict the conditions under which aluminium can be expected to reduce magnesium oxide.
Answer:
The equations for the formation of the two oxides are :

If we look at the plots for the formation of the two oxides on the Ellingham diagram, we find that they intersect at a certain point. The corresponding value of ∆G° becomes zero for the reduction of MgO by Al metal.

This means that the reduction of MgO by A1 metal can occur below this temperature.
Aluminium (Al) metal can reduce MgO to Mg above this temperature because ∆fG for Al2O3 is less as compared to that of MgO.
NCERT Solutions for Class 12 Chemistry Chapter6 General Principles and Processes of Isolation of Elements 30